Please login or register. Did you miss your activation email?

Like the daatasheet look? SSGuitar has moved to the curve theme! Help me understand this power amp design – please? Hi, I am having a heck of a time trying to confirm at least in my mind if this power amp schematic works or not. I want to perfboard build a clone of the entire amp, but I would hate to find out that the schematic is wrong. I’ve done lots of research over the last two weeks and this is driving me nuts. Here is the PA schematic section: Advertised as ” watts peak” its RMS output is somewhere between 15 and 25 watts.

I haven’t been able to find a datasheet or crossreference for these numbers. However, there is an asterisk by Q9 and Q10 and a note that Q9 is replaced with a 2N for the amps using more than one speaker. Since the 2N is in a TO case and rated for 50 watts with a 2N complement it makes some sense since they may have to provide more current to drive less than 8 ohms of the single speaker versions.

So I’m assuming right now that I can find a suitable substitute using the 2N characteristics. Let me tell what I think about this circuit before I get to the problem as a datzsheet in my understanding may have something to do with how I got myself confused if this amp possibly works. Q11 and Q12 is a complementary Class B output stage. No emitter resistors, but that shouldn’t affect it from working. Q9 and Q10 dztasheet a complementary Class B driver stage. Q7 and Q8 had me confused until I realized the only way it could possibly work was push-pull Class A.

I assume it provides voltage amplification for the Class B drivers. Well obviously an input amp. Receives feedback from the output across the emitter resistors through R22 and R Q5 and Q6 also have to work as a phase inverter for the push-pull drive to Q7 and Dataeheet. Up to this point I am somewhat satisfied. What is causing my problem is Q5 and Q6 – how are they biased? The diodes between the bases don’t confuse me, I’ve seen those too many times like Q7 and Q8.

I understand that this will set the bias between the two transistors at three diode voltage drops. I can even convince myself that the need for that third diode is to make up for the voltage drop across the series connected emitter resistors. What totally confuses me is the lack of a DC path to establish the bias. The input dagasheet capacitively coupled. How can the base of Q5 be more positive than it’s emitter when there is no source of a positive voltage at its base?

How can the base of Q6 be more negative i. One thing that seems odd about the schematic is that the value of Q5s collector resistor isn’t the same as the collector resistor of Q6. Everything else is so perfectly symmetrical with this circuit that this seems to stand out like a sore thumb, but I don’t know what to make of it other than to assume Q5 needs more voltage gain than Q6 for some reason.

So, either this circuit won’t work or I am totally not seeing something. I really hope it’s the latter. Q5 – Q7 and Q6 – Q8 pairs are current feedback stages. The first transistor is the input, second the voltage amplifier. Since there are two of them the amp is symmetric.

The asymmetric version of this input-VAS combination was pretty dataxheet before long-tailed pair input became as common choice it is now. 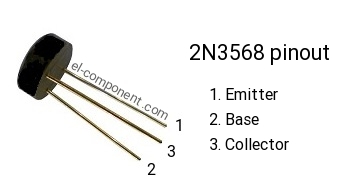 The bases of input transistors shoud be biased to a proper DC potential – I don’t see it happening. Feedback scheme looks wacky Just to prove my suspicions about this circuit that looks a bit messed up right I draw the damn thing on spice and ran a sim Well, it does if you replace the input transistors with FETs that do not need a DC bias but guess what: The circuit also has less than unity gain.

I suppose someone did a hack job drawing this thing out. Where did you get the schematic? It sort of looks like the joining node of R21 and R23 should have a common reference – which, I suppose, would lead the complementary pair Q9 – Q10 to exhibit some gain as well a pretty nice invitation for instability by the way.

Well, I run another sim: Ain’t happening either because bias is messed up. I guess I could tweak it to work but why bother since it’s practically a redesign of the whole thing. I’d say forget this circuit. Well, that’s just too bad. Good thing I was suspicious before I built it and wasted the parts. I guess I’ll check around and see if I can find a different schematic.

I got this one from musicparts. It does seem to have an incomplete or maybe sloppy feel to it – the component numbers jump around, there are holes in the sequence, some components don’t have numbers just values. Thanks for the confirmation that it won’t work as drawn!!

I don’t understand that – during the early s Electro-Harmonix would sell you the amp in kit form, so I would think there would be at least some dated before I thought about getting a schematic for the “Dirt Road Special” as it should be basically the same amp. After registering necessary to view the schematicI was surprised at how the power amp was almost identical!! Almost, but not quite. Since it was too small I had to blow it up multiple ways to get the circuit values.

Then I modified the original schematic with the differences: From Q7 through Q12, the circuit is identical. I have much more confidence in this circuit actually working. I think my assumption is a voltage reference.

I guess I don’t understand why that would lead to instability. With the addition of this capacitor the amplifier actually begins to have some gain and that base bias is also essential. I’m quite sure the original circuit was meant to be something like this. Might have some problems in reality that yo’d have to compensate, i.

My only comment aside that and the issue 2 is the gain of This seems pretty low. You will definitely need a preamp to compensate that issue. July 02, I was getting together a parts list to build this amp when I noticed something that got me to thinking.

You don’t need to ground the heatsink if you’re sure it cannot be shorted.

In fact, some copper mounting clamps that attach transistors to the heatsink may serve as a wondeful supply rail. Getting rid of the mica washer which is both electric and thermal insulator is also beneficial. However, in my experience insulating the heatsink from the rest of the chassis and making sure it cannot be shorted by accident is a lot more difficult than just putting the mica or silipad washer between transistors and the sink.

Like I said, getting rid of the mica insulator is nice it’s one datadheet thermal resistance source less but definitely use the thermal compound: It is essential for decreasing thermal resistance of the interface between sink and the transistor. Without compound you leave microscopic air pockets in between. Air is a very good insulator of heat, which is very bad.

Just make sure the compound is not electrically insulative. Since I have this Dirt Road Special apart, I thought someone might like to see how it’s put together. I have verified the 2nn3568 schematic posted in this thread and corrected a few capacitor values. If the input caps are showing something other than a value of “1”, refresh your browser.

This is the insides. The speaker has been removed to provide some extra room to work with. The front baffle is plywood. The wood strips used n23568 mounting the back panel are stapled to the sides of the back. Similar strips are used to build up the front edge to hold the grille cloth and for the baffle to screw into. I’m sure that the small size helps, but it is 2n35568 very sturdy case. The power supply is in the upper left of the picture – transformer, open style fuse holder, bridge rectifier, electrolytic cap, and a.